For a party that claims to be the best defender of India’s national security interests, it is strange that the Bharatiya Janata Party does not have a separate dedicated document on the subject of national security like the Congress does.

The BJP’s election manifesto, ‘Sankalp Patra’, mentions China all of once – while referring to the Russia-India-China trilateral framework for multilateral cooperation in the same breath as the Japan-America-India trilateral.[1]

China, does, however, appear by implication in a number of instances – in the reference to the Act East Policy and the commitments to seeking permanent membership of the United Nation Security Council, increasing the strength of the diplomatic corps as well as setting up of a ‘University of Foreign Policy’.

Clearly, in the Act East Policy, India faces China as the biggest challenge to its ambitions and activities in East Asia. The call to expand the numerical strength of India’s diplomatic cadre appears to acknowledge the fact that China’s foreign ministry is one of the largest in the world, while India’s is one of the smallest and simply not up to the task of meeting the multiple demands of modern-day diplomacy and the country’s international security objectives.

And perhaps, the somewhat crudely named University of Foreign Policy is inspired by the Chinese Foreign Affairs University that trains both Chinese and foreign diplomats? Nevertheless, the real objective should be to develop departments and centres for the study of international relations and area studies in major universities and cities throughout the country, not limit it to a single institution. China’s current international outreach has been built on the back of strong central government, and even provincial government and city government-level funding, for precisely this sort of development of academic institutions and think-tanks across the country over the past couple of decades. In India, however, the policy hitherto vis-à-vis academic and research institutions, has been to rob Peter to pay Paul. 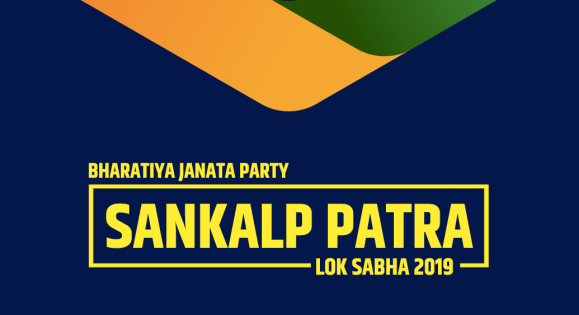 Overall, the BJP manifesto is short on any details about policies towards China and the wider region or on how these might be operationalized. There is also the rather large claim that the BJP had ‘[n]ot only… succeeded in strengthening our Armed Forces with state-of-the-art defence technologies, but [India had] also become self-reliant in this field.’ It is hard to believe this is the case except in a select few sectors and especially when compared to the fact that China is one of the world’s largest exporters of military equipment while India remains one of its largest importers.

The Congress manifesto points out that under the BJP government spending for national defence as a percentage of the GDP has actually fallen reaching its lowest in 57 years in 2019.[2] If the Chinese effort is in trying to hide the significance of their high military spending through rhetoric that claims China is a peaceful country, in India, the BJP appears to have substituted for the slack in spending with rhetoric of the opposite nature.

Glibly threatening the use of nuclear weapons against Pakistan as the Prime Minister has done during the election campaign is a case in point.

In the process, India will lose the support of countries that value responsible international behaviour and which have a say in India’s entry into the Nuclear Suppliers Group. Thus, on the one hand, we have the Chinese giving the impression of being a responsible power ready for global leadership, even as it consistently undermines international order and regional stability through its actions in the South China Sea, for example. On the other hand, there is India that has since Independence contributed militarily and economically to regional and global stability but which might now be viewed as jingoistic and irresponsible.

Loose talk about nuclear weapons also draws greater attention to India’s conventional military capabilities. The fact is that since World War II conflicts including between India and Pakistan, have been decided on the basis of superiority in conventional weapons and here, India’s lack of indigenization and heavy dependence on foreign weapons supplies raises increasingly uncomfortable questions.

Meanwhile, on the issue of China’s Belt and Road Initiative (BRI) that has occupied much of India’s and the world’s attention over the past five years, it is appropriate to look at just what the BJP has offered by way of alternatives to countries in India’s neighbourhood and further afield.

In May 2017, India had made a strong case against China’s BRI investments on the grounds that they lacked transparency, accountability, financial viability and environmental standards among other things. However, New Delhi has since then offered precious little either by way of replacing China in important infrastructure projects in the affected countries or in developing their capacities in the aforementioned areas in order to help them negotiate better with the Chinese.

None of India’s even lower-scale rivals to the BRI, such as the Asia-Africa Growth Corridor or the Bangladesh-Bhutan-India-Nepal network have shown tangible results yet.

Despite the constant din around national security in these general elections, therefore, the fact is India has been rather poorly served by the BJP government on longer-term issues of national security, and especially, on the challenges posed by China.

This article was originally published as Jabin T. Jacob, ‘BJP manifesto draws a blank on national security, China’, Moneycontrol.com, 7 May 2019.

China analysis from an Indian perspective