This article was specifically requested as an op-ed by the Renmin Ribao at very short notice. I submitted it in early December 2014 in English and they sent a Chinese translation for my approval. I approved it but it was then never published.

The Asian Infrastructure Investment Bank (AIIB) is a sign of Asian commitment to both regional and global economic development. Besides promoting regional connectivity and self-reliance for Asian countries, the AIIB also creates opportunities for developed countries in the form of greater investment opportunities as well as for promoting their own economic recovery.  As the Chinese Finance Minister Lou Jiwei has pointed out, historically, the establishment of regional multilateral development banks such as the Asian Development Bank (ADB) or the European Bank for Reconstruction and Development did not weaken the influence of existing development banks such as the World Bank. Rather, it was the total capacity of development financing that increased promoting still further development of the global economy. Thus, the AIIB will be an additional source for development financing in the Asian region with a specific focus on infrastructure and in contrast to the ADB with its focus on poverty alleviation.

Just as important, and as Minister Lou stated, the AIIB appears willing to learn from the good experiences and practices of other multilateral development banks accumulated over several decades. This is especially important as Asian nations today, do not have the luxury of repeating the mistakes of the past and must, in fact, enforce even higher standards, in ensuring labour rights and environmental protection, for example. As in the case of the BRICS New Development Bank, where an Indian official is slated to be the first head, it must be hoped that the AIIB’s leadership too, will draw on the expertise of countries like India with its excellent tradition of banking and financial sector regulatory frameworks. To quote a recent statistic, the Securities and Exchange Board of India that regulates the Indian stock market was recently ranked 7th worldwide for investor protection, the highest among the BRICS nations and higher even than many advanced economies such as the US, Japan, France and Germany. Significantly, this was a huge jump from its 21st rank in 2013. Such high scores on other economic parameters make India a natural participant and leader in Asia’s multilateral initiatives as well as a partner for China in establishing and strengthening new initiatives.

As a fellow developing country and rising economic power with China, India will no doubt play an important role in the success of such initiatives as the BRICS New Development Bank, the AIIB and the ‘one belt, one road’ initiative. In this context, it is noteworthy that the AIIB has been declared as an open and inclusive institution with possibilities for still more countries joining in addition to the original 21 members. Asia is a region where sensitivities about history and sovereignty abound and it does not need new causes of conflict and antagonism. Open and inclusive multilateralism is the way to go for the region and will hopefully help consign to the dustbin of history, past conflicts between governments and nations so that people-to-people contacts between countries can grow and flourish.

While another major multilateral bank, the World Bank, has welcomed the creation of the AIIB, the US has, for the moment, declared its opposition and even succeeded in preventing Australia and South Korea from signing on to the new bank. However, there are already murmurs of protest in Australia and South Korea is in any case, in the midst of intense negotiations for a free trade agreement with China, indicating that it is only a matter of time before these countries also join the AIIB. Even in the US, there is debate about Washington should not, in fact, be joining the new bank. Until that happens, however, Sino-US competition in this regard is not a situation the rest of Asia would look forward to. So China should show greater creativity and vision in order to overcome American objections and maintain Asia as a region of peace and development.

Asia’s new multilateral initiatives should not be an excuse for any one country to exercise dominance or hegemony in the Asian continent. Clearly, China is one of Asia’s preeminent powers. Other countries like Japan, Indonesia and India are all significant political and economic players on the continent but while Japan is not growing as fast as it used to, Indonesia and India are yet to reach their full potential. In the interval, it is Beijing that has taken the lead and seeks to knit the continent together, as well it should.

The AIIB is an exercise that will eventually involve hundreds of billions of dollars worth of investments over the coming decades and China’s rapid economic growth has placed it in a position where it can put a great deal of the required money on the table. In addition to promising to fund half of the US$50 billion startup capital for the AIIB, China has announced a further US$40 billion worth of investments as part of a new Silk Roads fund much of which again, will go into infrastructure development.

While the money will be welcome in most of Asia, Beijing must be careful that this ability does not turn into a new kind of hegemony over countries that require such investments. One of the reasons that Western countries and their aid and development experts were looked at unkindly by the Third World and as engaging in a new form of colonialism was because they used their wealth and expertise to underline their own importance and superiority in poor countries. It is with great difficulty that the Third World has begun to shake off this yoke of Western dominance. Countries in Asia, many of which only got rid of imperialism a few decades ago, will not want to replace Western dominance with Chinese political and economic hegemony.

China therefore, has the duty to act as both a responsible leader with respect for international law and norms and a friendly and respectful partner. Of course, such responsibilities extend to all nations, including India, that seek a leadership role. Beijing has taken a good initiative by proposing and promoting the AIIB and trying to get as many countries involved as possible. Now it has the more difficult task of carry along all its partners for the longer journey ahead. 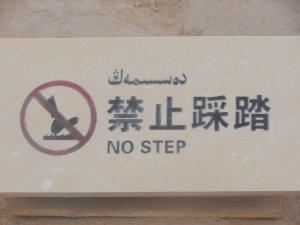 China analysis from an Indian perspective