This work is a collection of pieces written by the author in various online platforms and as part of other edited volumes. The reader does not have the benefit of an introduction that ties in all the chapters together but the fact that the book releases right after the conclusion of 19th Congress of the Communist Party of China (CPC) in Beijing in October certainly helps provide context.

All the big issues are covered here – from Xi Jinping’s rise to power as General Secretary of the CPC and his consolidation of power over the past five years, the murky details of the fall of Xi’s rival Bo Xilai, and China’s military reforms and reorganization. Alongside, a host of relatively arcane issues such as China’s annual sessions of its equivalent of a national parliament and Xi’s new rules for propaganda, media control – thought control, no less (the infamous Document No. 9) – are also examined.

Ranade also discusses Chinese foreign policy with respect to India. He covers China’s boundary transgressions, its policies towards Tibet, and Xi’s major foreign policy initiatives such as the ‘belt and road’ project, which India has unequivocally opposed, especially the China-Pakistan Economic Corridor.

Ranade does not believe that the direction of Chinese foreign and security policies have much by way of positive implications for India-China relations. One might disagree with the assumptions he uses or the reasons he offers but no observer of Chinese words and actions on the South China Sea or as part of its ‘belt and road’ initiative can fail to come away with a sense of unease about Chinese regional and global intentions and ambitions.

Making predictions in Chinese politics and foreign and security policies is inherently risky business but this collection of articles shows how the author has been able to identify important trends and personalities fairly accurately and often in advance of when they actually began to engage mainstream attention. 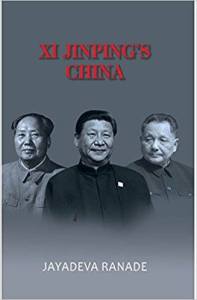 To this reviewer, it is the yeoman’s service that Ranade performs in making the workings of Chinese politics comprehensible to the average Indian reader that deserve the greatest appreciation and emulation. May the tribe increase. And just as importantly, may the tribe also learn to cooperate across the domains of government, universities and research institutions.

Understanding Chinese politics will be as important as understanding the workings of its economy – the two are, of course, connected – and will be a necessity as Indian leaders, entrepreneurs and ordinary citizens begin to engage with China. This is an engagement that will be both inevitable and crucial for India to figure out what it must and must not do to pull itself out of a culture of second-best or no-good-at-all, to find space for its own constitutional ideals and values in a world increasingly hostile to complex ideas and prone to being swayed by Chinese lucre.

This review was originally published as Jabin T. Jacob, ‘Yeoman’s Oracle’ in The Indian Express, 6 January 2018, p. 25. This version incorporates a correction in the last paragraph.