As the blurb of this book says, while information about the Tibet Autonomous Region (TAR) is plentiful in China’s official media, there is comparatively little about the people who actually govern the province in China. This book tries to fill this important gap in knowledge and the author is to be commended for taking on an onerous task.

The importance and significance of the work can be understood when one considers that the best-known international repository of information on Chinese leaders, China Vitae run by the American think-tank, Carnegie Endowment for International Peace has no data on a significant number of the officials that this book includes. Memebers of the Standing Committee of provincial Communist Party Committee are not insignificant political leaders, even if there is an informal hierarchy among Chinese provinces based on GDP, history, ethnic composition and so on. However, China Vitae does not have entries for many members of the TAR Standing Committee and even if a name were available, the data is not up to date, including even for the Party Secretary Wu Yingjie who took up his post in August 2016. Ranade by contrast goes into granular detail on Wu’s career in Tibet and his public statements (pp.19-23) as he does also for at least a few previous Party Secretaries, including former Communist Party of China (CPC) General Secretary and PRC President, Hu Jintao who served in Tibet from 1988-1992.

However, this book could have also supplemented its information with other details available on China Vitae. A case in point is the biography of Standing Committee member Dong Yunhu (董云虎) which is not updated on China Vitae where it still says his current former Deputy Director of the Information Office of the State Council but which inforamation is missing in the book.

The book could have also done with greater consistency in a number of aspects. Given the nature of the Chinese names in their romanized form, it would have been useful for the specialist to also have the names of the cadre provided in Chinese characters, too. A lay audience trying to figure out a foreign political system and structure could have benefited from a greater use of charts and tables to convey such information as the hierarchy, ethnic origins, ages, areas of work experience and so on of the leadership.

There are other infelicities such as a lack of clarity on who the Party Secretary of Chamdo is – Norbu Dhondup (p.33) or Abhu (p.139)?. Similarly, while the note to the map of Nyingtri/Nyingchi prefecture in Tibet’s southeast states that the map inlcudes parts of the Indian state of Arunahcal Pradesh within its geographic boundaries (p.151), such a note is missing for the Shannan/Lokha prefecture, the other TAR administrative unit that incorporates parts of Arunachal Pradesh in its maps (p.121).

The value of the book is in bringing to an Indian audience greater depth to their observation of Tibetan affairs. One important highlight is the Aid Tibet programme under which richer provinces in China especially and central government ministries depute their officials to work in TAR for limited periods of time. Some of these officials – mostly Han Chinese – have chosen to stay on and risen faster up the ranks than they would have in their home provinces, indicating also the opportunities that exist in a poor province for ‘outsiders’. 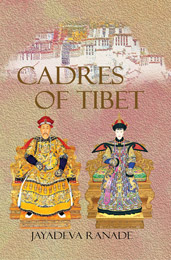 This book conveys in no uncertain terms the degree to which Tibet today is different from the Tibet that most Indians might have in their imagination. For one, as Ranade notes correctly, there is a large number of Tibetan cadre that are CPC members and his guestimate of about 220,000 in TAR alone (p.10). And this figure is easily larger than the number of Tibetan exiles outside China. Similarly, a large number of Tibetans are also employed in the Chinese state’s security apparatuses at all levels (p.55). In other words, despite the Dalai Lama’s global influence, Indians at least must have a realistic view of the capability of exiled Tibetans to bring about change inside China or to achieve any of their other proclaimed goals.

The volume provides useful pen pictures of the leaders both serving and past in both TAR and in the Chinese capital who exercise influence on Tibetan affairs, as well as several interesting snippets of trivia. It could have gone further though in explaining some aspects that stand out immediately to both lay and specialist readers. For instance, it seems apparent that Tibetan leaders who are considered reincarnations remain in office long past the normal retirement ages that apply elsewhere in China but why do some Tibetan religious leaders appear in photographs in a suit and a tie while others appear in their robes? Just what is the acceptable role of religion in the lives of TAR officials? This is a question that is particularly relevant especially when in Xinjiang to the north, another minority-dominated but largely Muslim province to the north, Chinese authorities have been cracking down heavily on religious observances.

Ranade’s book is the result of the research focus on Tibet at his New Delhi-based Centre for China Analysis and Strategy. India needs more research institutions and think-tanks in the field of China and East Asian studies that are able to devote attention to such niche areas even as they communicate clearly and simply for the general audience. At the moment, the cupboard remains largely bare and problematically so given China is India’s biggest neighbour. The Ministry of External Affairs’ planned China studies think-tank will hopefully meet expectations of such specialist analyses required to inform and educate the Indian government and citizenry.

Meanwhile, this reviewer looks forward to the next updated edition of Cadres of Tibet and perhaps, a similar effort on Xinjiang, the other province in the PRC that borders India and with which too, India has long historical and cultural ties.

This is a longer version of a review originally published as Jabin T. Jacob, ‘In High Places’, in The Indian Express, 9 December 2017, p. 23.